Our customer was looking to replace their office phones with a more modern version. They looked at the available standard phones, but found that many did not meet their specific needs and requirements.

The customer had a clear vision of the phone’s design and functionalities. Next to that the customer realized standard phones were also too expensive and did not fit the budget. That is when they decided to investigate the option of having an office phone custom made for them.

The challenges in this custom development process relate to one of four categories. Budget, design, operation or technical specifications.

Lets first look at the design. Because this phone would be used in an office environment cleaning it had to be easy. Offices collect dust and phones get touched repeatedly on a day to day basis. The design of the phone allows for easy cleaning as it has minimal edges. In relation to this challenge is the flush design requirement. A flush design eliminated ridges and edges and makes the enclosure of the phone smooth. Again making it easy to clean.

The customer also had some technical specification requirements. In particular high visibility of the screen and a quick response time of the touch screen. Both ensure that using the phone is quick and efficient.

The customer is custom designing a great amount of phones that have some specific requirements. Developing this product against minimal costs and on budget was therefore a hard demand.

After a first exploratory meeting with the customer we partnered up with design company Dunc. Together with this company we partnered up in realizing this custom made office phone.

First the product was described and specified. After this we supplied some sample products for testing. The sample products were submitted to different tests including a heat test. After extensive testing of the design, touch screen and components changes were made based on the results.

Next 10 prototype office phones were delivered to the customer for more testing. One testing conclusion was that the handset needed to be able to mount on the left and on the right side of the phone. Depending on whether the user is right or left handed.

After the first prototype (prototype A) a second version was developed (prototype B). This second prototype was again tested very well. These tests came up with some more adjustments. The sound produced by the phone was too soft, the colour needed to be changed from black to grey, the glass panel would look better symmetrical and the range of height adjustable settings was not wide enough.

After careful testing and re-designing of both prototypes, we are now in the final phase of completing the custom designing process.

Together with Dunc and the customer we designed a completely custom office phone. The design solves all the challenges.

It has a flush design, is easy to clean and operate and is within budget. The phone offers a high quality sound system and is adjustable in height. It comes in a dark grey colour (original colour was black) and has a symmetrical glass cover on top of the display and touch screen.

The phone is a modern and efficient solution that uses the latest technologies. It features a 12 inch display (1280 x 800) and 400 nits LED back light. The display is covered with a custom projected capacitive touch screen and cover lens. The cover lens is made of clear glass with anti-fingerprint treatment. The phone system runs on Windows Embedded Standard 7. 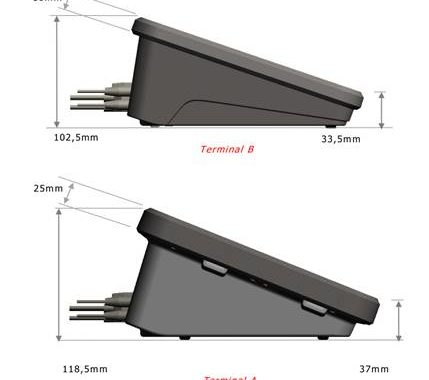