We received an inquiry from the supermarket chain to develop a 15 inch POS monitor with touch option. Based on their current system they already knew a standard solution would not suffice. At the time of inquiry the company was using 15 inch monitors, without touch screens.

The customer came to us with this inquiry based on our technical knowledge and long term experience with touch monitors and custom designs.

One of the biggest challenges of this development was choosing the right touch screen technology. The supermarket’s current register system at the time featured no touch screen.

Things to consider when choosing the right touch technology was that the register systems are used intensely and come in contact with liquid and dirt. The cashier’s hands get wet from fresh fruits and vegetables which causes the register to become wet as well. Some touch technologies, like resistive touch screens are resistant to surface contaminants and liquids, but makes them wear quicker. So this was something to consider.

The touch technology was the focal point of this product development. The solution was going to be build around the touch screen of choice.

Another challenge was ensuring the solution fit the environment and blended in. Finally, the solution was to be based on a one-cable-concept. This would make the solution easier to install and would provide less room for error and fewer cables.

Developing the POS monitor was a lengthy proces. All in all the development took up the better part of 3 years. The reason for this, was the volume of the project.

The product was then approved, so the molds for the plastic enclosures were made. We started with a pre-production of 100 POS touch monitors that were installed in a store for a final round of testing.

Eventually about 3,000 POS monitors with touch were ordered.

We provided the customer with 3 years of after sales support. However, we did not have to repair many products during this time. The failure rate was only 0.5%.

The final POS monitor was based on a standard 15 inch monitor. However, the touch screen, connectors and enclosure were completely modified to fit the customer’s requirement.

The register features a 15 inch display with infra red touch screen. The display’s resolution is 1024 x 768 px, has a brightness of 350 cd/m2 and black plastic enclosure.

There is only one interface at the bottom of the POS monitor which controls power on/off, USB, audio and LVDS. 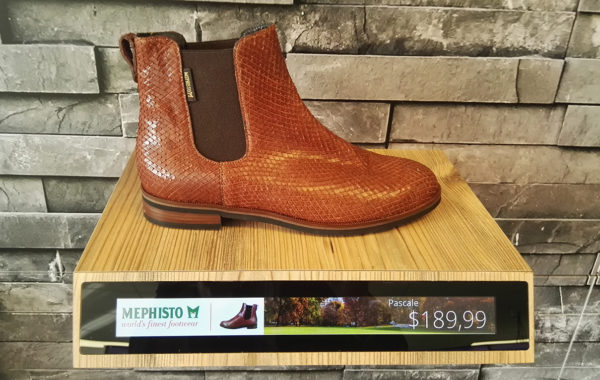